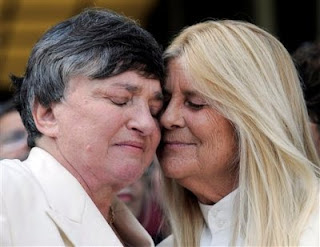 On the June 17th I stood behind Robin tyler and her wife Diane olson and Rev. Troy Perry and his husband Phillip De Blieck when they announced the ruling and we did a wedding ceremony and blessing for them at MCC Los Angeles the mother church of MCC.

Just last week Rev. Cindi Love came out to MCC Los Angeles to get married and Bob and I were invited. Again, here I am having dinner with Robin Tyler and Troy perry. I don't get it, but God is leading me somewhere. There is a reason I get to hear these peoples stories and share in these moments in their lives and I suspect it is because I am ready to start the federal fight.

Now, now not this year but after I graduate perhaps, we have to defeat prop 8 here in CA first.

I have always been very lucky with the historical figures of the gay rights movement that I have met and worked with over the years. I know that their stories are my responsibility to remember , recall, and hold sacred. It is their stories that keep me moving and renews me with the strength I had when I was a mere boy of 18 and first discovering who I was.

I have sat in a bar in new york city and listened to the story of one of the TG's from the stone wall riot. I ran around in SF with the first openly gay man to run for a public office ever. I went to school witht the lover of the first gay man withy AIDS on MTV's real world show. I also went to school witht he guy who they replaced all his blood with monkeys blood in attempt to find a cure for AIDS.

These are just a few of many stories I have because the Lord has allowed me to be in the right place at the right time over and over again.

And now I have Just discovered that a dear freind from my first year at claremont celebrates pride with as much pride as I do and I never knew. KEWL!
Posted by Rev. Joseph P. Shore-Goss at 2:11 AM