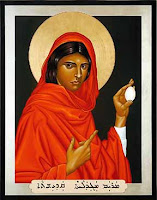 Over the past few weeks, We have been listening to the unfolding of the revelation of Mary Magdalene who she was and who she is or who she should be to us today. Mary of Magdela or the Magdalene has been reduced to the prostitute, the sinner, the unclean woman who followed Jesus, and yet, who she was truly. . .is being slowly revealed to us.
Rev. Bob has told us that. Magdela was a fishing community on the Sea of Galilee, three and half miles from the city that Herod Antipas founded—Tiberius. It was a small fishing community. Yet we know from Luke’s Gospel that. “Accompanying him were the Twelve and some women who had been cured of evil spirits and infirmities, Mary, called Magdalene, from whom seven demons had gone out, Joanna, the wife of Herod's steward Chuza, Susanna, and many others who provided for them out of their resources."

Imagine woman traveling the country side of Jerusalem freely with a group of fisherman proclaiming radical news.
Woman in those days had their freedoms severely limited by Jewish law and custom, as they were in essentially all other cultures in that time. Generally speaking: woman were restricted to roles of little or no authority, they were largely confined to their father's or husband's home, they were considered to be inferior to men, and under the authority of men –
either their father before marriage, or their husband afterwards.
Women were not allowed to testify in court trials. They could not go out in public,
or talk to strangers.
When outside of their homes, they were to be doubly veiled.
"They had become second-class Jews, excluded from the worship and teaching of God, with status scarcely above that of slaves."
Their position in society was defined in the Hebrew Scriptures and in the interpretation of those scriptures.
A woman could be arrested, beaten, raped and/or killed for the slightest display of impropriety
and yet, here with Jesus, the Magdalene walks freely as an equal and provides for the ministry of Jesus and the disciples.
I still wonder who this woman was. . . I mean to provide for twelve men on the open road in places where they were under suspicion. . . The men themselves were under suspicion for being associates of Jesus.
What does this make this woman, this woman who walks freely as a follower,
This woman who has the means and the wherewithal to listen and to learn from Jesus,
Who is this woman?
The first time we hear of Mary she is referred to as the woman who had seven demons cast out of her. You may recall that Pastor Bob stated “Whatever her trauma was, Jesus exorcized her of the pain and memories that traumatically scared her.
We don’t know the events that led Jesus and Mary to cross paths, but Jesus met with her in a ministry of exorcism and healings of unclean spirits.
Such afflictions of unclean spirits had to be dealt with in the inward, spiritual personality.
Jesus believed that God’s Spirit was far more vital than spiritual possession. He preaches, “But if it is by the finger of God that I cast out the demons, then the reign of God has come to you.”
There were very few quick fixed exorcisms. The description of Mary possessed with seven unclean spirits indicates that Jesus exorcism took place over a period of time, perhaps months or even up to a year.
It meant replacing each expelled demon or unclean spirit with the divine Spirit. He anointed her with oil as a symbol of installing the Spirit of God within her psyche and her soul.
He prayed over her many times, and it was a struggle for her to become emotionally and spiritually free.
As she grew in emotional and spiritual health, she finally became free and a committed disciple of Jesus.
In fact, Mary became the living embodiment of the power of the Spirit. “
I understand that seven is a magical number in the scriptures and it usually refers to something of god or in a perfect form.
In the Gospel of Mary she is asked to teach what she knows for peter, peter who later would be named the head of the church, says to her, a woman;
“Sister, we know that the savoir loved you more than all the other women. Tell us the words of the savoir that you remember, the thing s you know
The things we don’t know because we haven’t heard them.”
Mary begins to teach of the assent of the souls and when the soul reaches the fourth power she states speaking of the soul
“It had seven forms. . . “
She lists these forms as darkness,
desire,
ignorance,
a zeal for death,
the kingdom of the flesh (or earthly desires)
foolish wisdom
and the last is a wrathful or vengeful wisdom
she describes these as the seven powers of Wrath”
I believe these are the demons that Mary was exorcised of.
I believe she, somehow must be a rich widow and that her loss, perhaps it was loss of her children, loss of her husband, or just the brutality of the world around her had made her a dark, vengeful and hateful woman
and when her path crossed with that of Jesus’,
Jesus, as bob said, over time healed her of these things and taught her of the soul, taught her of love, and of blessed spirit and generosity.
She was brought in and taught things that no other man or woman was taught.
So now we have an image of a woman, who is somehow well- to- do and independent,
a woman who is not afraid to break with all tradition and understanding of her time and be taught, healed and anointed, by a man who is despised by the reigning Jewish powers and feared by Rome.
We really don’t know if she walked with him for three years or just the final year but, the point is, she walked with him.
She walked and stood with him at the cross when the others had fled.