Via Stillpoint as shared by Judith Favor 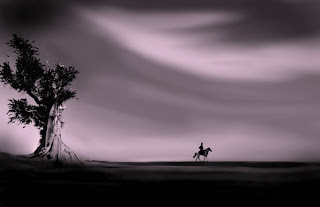 A journey continues until it stops

A journey that stops is no longer a journey

A journey loses thing on its way

A journey passes through things, thing pass through it

When a journey is over, it loses itself to a place

When a journey remembers, it begins a journal

Which is a new journey about an old journey

A journey over time is different from a journey into time

An actual journey is into the future

A reflective journey is into the past

A journey always begins in a place called Here

Pack your bags and imagine your journey

Unpack your bags and imagine your journey is done

If you're afraid of a journey, don't buy shoes


“The spirit of the Exalted YWHW is upon me,

for YWHW has anointed me:

God has sent me to bring good news to those who

To proclaim release to those held captive

And liberation to those in prison;

To announce a year of Favor from YHWH,

And the day of God’s vindication;

To comfort those who mourn,

To provide for those who grieve in Zion-

To give them a wreath of flowers instead of ashes,

The oil of gladness instead of tears,

A cloak of praise instead of despair.

They will restore the ancient ruins,

They will repair the ruined cities,

These are the Prophet Isaiah’s words…Isaiah 61:1-4, 8-11 to be exact this is the Old Testament reading for today yet I wonder if these words could not have come from John himself. I imagine John as a scruffy little man, a bit haggard from living in the wilderness and surviving on wild honey and locusts, quoting this text very loudly at the river’s edge.

John was described as; “a voice crying out in the wilderness!” Today we are told he comes “as an envoy from God, who came as a witness to testify about the light, so that through his testimony everyone might believe.”

John was an envoy, a messenger sent as a witness to the light.

The Apostle John, author of the Gospel of John, seems to have previously been a disciple of John the Baptist. It must have been with great affection and regard for the Baptist that the Apostle writes of him in the first chapter of his Gospel. We find the ministries and messages of John the Baptist and Jesus interspersed and inter-twined in this first chapter. John sought to identify himself with Jesus, and Jesus surely sought to identify with John and his message. There is, however, a great difference between these two individuals, as the Apostle John makes clear in this chapter.

The Word was; John came. The Word was the Light; John came, sent from God as a witness to this Light. John was a witness, and the Lord Jesus was the One about whom John testified. John was not the light, but a witness sent to testify that the Light was coming. To us, these words may seem redundant—old news. But they were, and they are, revolutionary. Nothing like the coming of our Lord in human flesh has ever happened before—nor will it ever happen again. John’s role in this is important, yet definitely subordinate. No one knows this more than John. What the Apostle John writes in these verses 6-8, the Baptist reiterates and underscores in his own testimony. These verses give us the reality by which John the Baptist governed his life and ministry.

Now place yourself in the sandals and camel hair suit of John the Baptist. God commands you to go out and to begin calling the nation Israel to repentance, announcing that the Messiah is soon to be revealed. You are not even certain at the time just who the Messiah is—or how He is to be revealed. You are to preach in the wilderness, so that all who want to hear you must come out of the city and into the wilderness. You have never even performed so much as one miracle. Can you imagine faithfully preaching a message of repentance in preparation for the Messiah, as John the Baptist did, without even knowing the name of the one about whom you were preaching?

Truly John the Baptist is a remarkable man, and He is a prominent figure in Advent, showing up each year in at least a couple of the Gospel readings and reappearing in January when we remember the Baptism of the Lord. In listening closely to John the Baptist, one senses deep humility; "I am not the Messiah. I am not Elijah (the greatest of the prophets). I am not the main attraction. The main attraction is coming, and I am not worthy to untie the strap of his sandals.”

John’s humility comes to expression when he says that he is not worthy to untie the strap of Christ’s sandal. This takes us back into travel on the hot and dusty paths of Palestine. As one walked in the heat and the dust, one’s feet inevitably become dirty. When one came into a friend’s house, the first courtesy provided was water to wash the guest’s feet. But the host would not normally do this himself. To attend to the feet was a task fit for a slave, and it would be a slave who was expected to do the actual washing of the feet

This humility was not only John's perception of himself; it is also recorded in the Gospel writer's description of him: John the Baptist was not the light, but he came to bear witness to the light. It is important that we claim John as a model for our lives, as human beings and as Christians. You are not the Messiah. I am not the Messiah. A messiah is someone who saves, rules, and fixes people. Many in Israel were waiting for a messiah in the first century. Life was difficult, harsh, and oppressive.

John's entrance into the drama of Advent each year might not seem relevant at first glance, but in fact his is a needed voice. Humility is a misunderstood concept' and it may be helpful to say what it is and what it is not. It is not low self-esteem. We are created in the image of God' and that is good. Humility is not false modesty. We have been endowed with gifts, and they are to be used for the Glory of God and the common good. One preacher put it this way: Humility is not thinking less of ourselves. Humility is thinking of ourselves less. Do you see the difference?

This can be liberating. I bet you know of folks who could be described as overachievers. You see their names in the newspaper, or you hear them being interviewed on television and radio, perhaps you have written letters of recommendation for them when they were getting ready to go to college. A day does not go by that someone is not being recognized in his or her Profession.

When congratulated they will say, "Oh, it's nothing", or, "It's not as special as it seems," or, "Yes, oh, but you should see what my brother or sister or neighbor or colleague is doing'" I am talking about other people, but if I am honest, myself as well. Kenneth carter points out that one of his seminary professors poked fun at the “I love me" walls that preachers love to have in their offices degrees, ordination certificates and I do have to wonder about how all of this helps us to preach better sermons about humility!

It is all mixed together with the drive to succeed and with ambition, performance, and goals. If we don't have these hopes for ourselves, we surely have them for our friends and loved ones. There is something constructive about all of this. Objectives are accomplished. Goals are met. Good is done. But there is also a dark side that can be a heavy burden. We begin to think that we are, in fact, the source of light. Sometimes, though, the bulb begins to dim. We might not use the precise language, but we begin to think that we are, in fact, the Messiah. We see other people as problems to be solved; we see daily lives as a series of messes to be cleaned up, dilemmas to be sorted through, and damages to be repaired. If you and I don’t take care of it, who will? The symptoms of this dark side are burnout cynicism, frustration with other people' and paradoxically' self rejection.

But remember, you and I are not the Messiah. We have limitations and boundaries. Advent comes along each year to give us this dose of humility, when once again we meet John, who helps us to get clear perspective.

Make no mistake. John the Baptist was a person of strength. He attracted people to his project'. "Among those born of women,” Jesus says, “no one has arisen greater than John the Baptist" (Matthew 1 1 :1 1 ). John was not weak. "What did you go out into the wilderness to look at?" Jesus asks the disciples who had gone in search of John (Matthew 1i:7)' "A reed shaken by the wind?''(v.7).The literal meaning was a weathervane that bends with the currents of the wind. John was not weak; he was strong-he could withstand the forces of the winds and the storms-but he was humble. His humility is found precisely in his understanding of who he is and who he is not.

Humility is not weakness, but the awareness of the Source of our strength. John reminds us that we are human. Were you aware that there is a connection between the word s humanity, humility, and humor. Each word has a common origin, in our word humus. We have a humus pile in the plastic bin out back that includes soil and leaves and kitchen garbage and probably some things I would not want to mention. It is a mixture of the most organic matter, the compost pile, and it is very rich and fertile place. That says something about us: in our humanity we are always a mixture of many things and out of all of it come life and growth.

Humility and humor are connected in our ability to laugh at ourselves-and sometimes we do have to laugh at ourselves. This is related to our humanity. We have limitations, boundaries; we are finite. Humanity is a reminder of our need to be grounded-again the connection with the earth. It is not accidental that the most fundamental posture of humility is kneeling. This self-awareness prepares the way for something more, something greater: Behold the Lamb of God who takes away the sin of the world.